Free Delivery on Orders over $50

This barley is hulled to allow faster and easier cooking while leaving much of the bran intact to preserve its nutritional properties and ensure a delightful chewy bite, which will hold even when cold.

This barley is hulled to allow faster and easier cooking while leaving much of the bran intact to preserve its nutritional properties and ensure a delightful chewy bite, which will hold even when cold.

Barley was one of the world’s earliest cultivated grains, featuring in traditional diets across the globe. Known as ‘hordearii’ or ‘barley-men’, Roman gladiators attributed their strength to barley.

Fontana FORMIELLO barley is cultivated at the foot of the Alps in Northern Italy.

Good to know: Add cooked barley to any one-pot soup or stew to give it body and flavour. Cook it in broth and add vegetables to make a tasty pilaf or risotto. Toss chilled, cooked barley with diced vegetables and homemade dressing for a quick cold salad.

Mix barley with mashed black beans to make a base for delicious veggie burgers. Barley can also be used as a variation to rice to make delicious puddings. 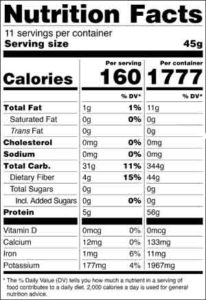 There are no reviews yet.

We use cookies on our website to give you the most relevant experience by remembering your preferences and repeat visits. By clicking “Accept All”, you consent to the use of ALL the cookies. However, you may visit "Cookie Settings" to provide a controlled consent.
Cookie SettingsAccept All
Manage consent

This website uses cookies to improve your experience while you navigate through the website. Out of these, the cookies that are categorized as necessary are stored on your browser as they are essential for the working of basic functionalities of the website. We also use third-party cookies that help us analyze and understand how you use this website. These cookies will be stored in your browser only with your consent. You also have the option to opt-out of these cookies. But opting out of some of these cookies may affect your browsing experience.
Necessary Always Enabled
Necessary cookies are absolutely essential for the website to function properly. These cookies ensure basic functionalities and security features of the website, anonymously.
Functional
Functional cookies help to perform certain functionalities like sharing the content of the website on social media platforms, collect feedbacks, and other third-party features.
Performance
Performance cookies are used to understand and analyze the key performance indexes of the website which helps in delivering a better user experience for the visitors.
Analytics
Analytical cookies are used to understand how visitors interact with the website. These cookies help provide information on metrics the number of visitors, bounce rate, traffic source, etc.
Advertisement
Advertisement cookies are used to provide visitors with relevant ads and marketing campaigns. These cookies track visitors across websites and collect information to provide customized ads.
Others
Other uncategorized cookies are those that are being analyzed and have not been classified into a category as yet.
SAVE & ACCEPT

Create your account, or login if you are an existing customer, let us know what you like and enjoy your discount!